Providing an objective perspective on your position and potential, to inform long-term decision-making

Building on our wealth of experience and our unique position as drivers of In Memory Insight, we can support you to get the most from every aspect of your in-memory and tribute programme.

In-memory fundraising can be inspiring, exciting and fulfilling. We can help you make the very most of your potential

A comprehensive assessment of all aspects of your charity’s in-memory fundraising programme, devised to help you propel your fundraising forward

We’ve just finished this year’s project and had a great day discussing all things legacies with our fantastic Dutch clients. Now in its seventh year, our Dutch consortium has grown to 23 charities, including the Royal Guide Dog Fund, Cancer Foundation KWF, Salvation Army and Dierenbescherming (a leading Dutch animal charity).

Together, our Dutch Consortium members received €138m legacy income and 3,000 bequests last year, equating to around a third of the total market.

It was great to meet in person and, it was fascinating to hear that many of the challenges being faced in the Netherlands are similar to those in the UK but against a different backdrop.

The consortium of 23 leading legacy charities showed a remarkable growth of 23% in 2020. 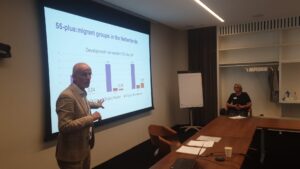 This growth is partly due to excess mortality from Covid-19. But it’s also because a larger proportion of those people have left a gift in their will – again like trends we’ve seen in the UK.

Legacy Foresight research in the Netherlands shows that increasing numbers of people have a will. Importantly, the share of baby boomers’ legacies is growing. Dutch Baby boomers are wealthier, are more positive about making a bequest and are more often child-free. Finally, we believe that marketing efforts over the past few decades to encourage leaving a gift in a Will has had a positive effect.

Unlike the situation in the UK, Covid-19 does not appear to have a negative effect on the legacy administration.

Legacy Foresight also forecasts growth for the next decade. For 2021, this will be more than 8% due primarily to a higher rate of mortality. If we look a little further, we expect the main economic drivers of legacies (house prices and equities/stock price) to continue to perform well.

Request a copy of the Snapshot Report (in Dutch). For more information on the Dutch Legacy Monitor, contact Arjen van Ketel or Richard Hill.

They all are heroes, who once were loved