Digital legacy fundraising – where are we now?

For Remember a Charity Week this year, The Wombles were the stars, encouraging people to ‘pass on something wonderful, leave a gift to charity in your will.’ 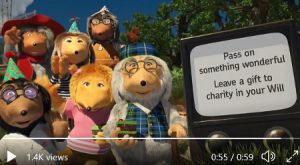 Ambassador Len Goodman appeared on GMB to talk about legacies and reduced the ask to this simple message: “If there’s a little bit left over, just leave a little bit of money to a charity in your will.” Beautifully simple!

Fast-forward to 2017 and things had moved on. 10 tips for great online legacy fundraising found strong examples where charities were using emotive text as well as engaging images and photos. However, in a sample of over 50 large, medium and small charities, most had pages which were pretty dull, especially smaller charities. The ones that stood out had confidence and a clear sense of themselves and their audience.

Three years later, where are we? Reports show that legacy gifts and awareness of leaving a legacy are rising. This year has presented some additional challenges for legacy fundraising, not just the practicalities of processing estates during lockdown, but the sensitivities of messaging around death and dying. Rob Cope spoke to Howard Lake about this and said however, there was an uplift, especially where charities were confident about their storytelling and did this in a positive and uplifting way. He said ‘charities who are loud about legacies will do well in a competitive market. You have to ask and ask in the right way. Legacies have to be at the heart of your financial resilience of your organisation.’

How does your digital legacy fundraising match up? Is it loud and confident? Is it engaging and positive? Or is it functional and hidden away – if mentioned at all online? Do you have digital assets produced specifically for digital channels or are they digitised versions of paper brochures? Do you promote legacies on social media – either during Remember a Charity Week or as part of your portfolio of digital fundraising?

As a charity, it can be hard to know where to start and difficult to assess whether your digital legacy fundraising is effective. Which is why I am really excited to be part of a new programme at Legacy Foresight.

Legacy Foresight say that digital and social media is growing as a means of acquiring and stewarding legacy donors. GDPR rules have meant that previous routes of contact are gone, and target generations are now increasingly active online. But that there is not “an agreed view of what makes for good online legacy communications. For example, how can we best use digital and social media to inspire, inform and impel legacy donors into making a gift? Can we develop KPIs and metrics to help measure and track each charity’s performance relative to its peers?”

This programme is currently looking for charities to join a new learning circle exploring the future of legacy fundraising. Download the project proposal.

Please get in touch with Meg Abdy if you have any questions or would like to join.

What could the budget mean for legacies?

Investing in the future of Legacy Giving

Legacy Foresight: The next chapter