Lucy Lowthian is a Legacy Marketing Manager at Samaritans and has recently passed her PhD which examines psychological well-being and the charitable bequest decision. We invited her to share her headline findings and discuss how they can be applied by legacy fundraisers.

Although it is clear that more people need to be made aware of legacy giving, it is also important to understand how donors want to be approached about the subject, so that it becomes a more meaningful experience for them. Understanding legacy giving from the donor’s perspective can help ensure that any communications about charitable bequests are as effective as possible.

We are told that potential legators pass through different stages of the legacy journey, two of which are consideration and intention. Yet little is known about what makes someone move from one stage to the next. For example, do certain psychological factors mediate (i.e. influence) the decision, which would provide us with a better understanding of the legacy decision making process?

The aim of my study was to bring theories about psychological well-being (PWB) into the legacy giving domain, to understand more about how a person’s PWB affects their charitable bequest decision, including how potential donors might pass from consideration to intention.

To collect data for analysis, two successive online surveys were sent out to Christian Research’s online panel. The surveys were open to anyone aged 18 years or over and respondents supported a range of charitable causes to ensure this study’s findings could be applied to a wider population. The number of respondents across both surveys exceeded 2,100 providing a strong sample size from which to generate results.

The first survey examined which psychological factors drive the charitable bequest decision and move a person from consideration to intent in the legacy journey. The second survey then drilled down into some of the key findings from the first survey, using scenarios in order to prime low/high levels of certain psychological factors to see if different combinations of each affected a person’s intention to leave heir Will.

So which psychological factors move supporters on in their legacy journey?

Results from this study have shown that we can increase a person’s intention to include a gift to charity in their Will if we can enhance their feelings of connectedness, self-efficacy, identity importance or sense of purpose in relation to the cause. These factors are discussed in more detail below.

Connectedness was shown to be a significant psychological factor; the more connected a person is to a charity, the more intent they will be to include them in their Will. Connectedness can be described as the closeness or intimacy a person feels in their relationships with others. A person builds these relationships over their lifetime, growing their social networks. They can forge strong relationships with charitable causes if they, or someone they love, have in some way benefitted from its work.

Building connectedness should be at the heart of charities’ communications with their supporters. For example, we know stories connect on an emotional level, so using donor case studies is a powerful way to motivate people to leave a charitable bequest. Connecting supporters with beneficiaries creates a personal bond; supporters can envisage who they are helping. Unicef is a good example of a charity which embraces the use of storytelling by regularly sharing videos of their legacy pledgers and beneficiaries to build connectedness – Meet our supporters: Pat Thorn – YouTube

Unicef also uses nostalgia as a way of strengthening emotional connections with their supporters by allowing them to create personal (video) timelines on their website so they can look back at memories together, while linking to Unicef’s achievements over the years – see Unicef Legacy – Create Your Own Personalised Timeline Video – Unicef UK

Higher levels of self-efficacy increased the likelihood that someone would include a charitable bequest their Will. Self-efficacy is a person’s belief that they can achieve their desired outcomes and make a difference by focusing on their longer-term goals. Self-efficacy empowers people when they are deciding whether or not to include a charitable bequest, because they believe that they can have a positive impact on the work of the charity and its beneficiaries.

So in order to increase legacy income charities need to show how a person’s legacy gift can make a difference. Charities are becoming more innovative in the ways they show the impact of their work, for example, although Brain Tumour Research has had to postpone their lab tours due to COVID-19, supporters are still able to take a virtual walk around their Brain Tumour Research Centre of Excellence at The University of Plymouth. Supporters can click their way through the virtual lab and watch videos of researchers as they explain how they are working hard to develop new treatments and ultimately getting closer to finding a cure – Plymouth University Virtual Lab Tour | Brain Tumour Research. Charities are also investing in TV advertising to showcase the difference gifts in Wills make – Create your lasting legacy Macmillan – YouTube

Greater purpose in life was also shown to have a significant effect on the charitable bequest decision. People who understand their life’s purpose tend to be more optimistic, well connected and happier individuals who are more engaged with life. Purpose in life is also positively associated with getting older; this is because people have had the time to experience more, so they have more meaningful memories and a longer life narrative.

Leaving a bequest in a Will to charity encourages a person to think about their life and what matters to them. For example, a beneficiary or volunteer may want to give something back to a charity that has been an important part of their life. There is also a greater sense of meaning in the act of leaving a charitable bequest in a Will because it provides a way for people to make a difference after they are gone, enhancing that person’s ultimate purpose in life. Their legacy will live on and benefit future generations, which is an incredibly positive way to be remembered.

Role identity provides people with a sense of purpose, so they know what is expected of them in certain situations. Identity grows stronger over time, as people develop a sense of belonging. For example, if a person has long been a charity volunteer or supporter, this could have a positive impact on their desire to include a charitable bequest, because of the importance they place on that role. Their connection with the charity has more than likely strengthened over time through the relationships they forge, impacting on their loyalty and sense of identity with the cause.

Therefore, ensuring supporters identify with the cause should be a priority for charitable organisations as well as providing them with opportunities to be personally involved. Regular communication with supporters can ensure people identify more closely with the charity. This highlights the importance of excellent supporter journeys so that charities have clear plans about how they will steward supporters in a way that builds loyalty and keeps them engaged with the charity’s work. Charities need to make supporters feel special and offer unique supporter experiences such as providing exclusive behind the scenes tours – e.g. Unicef’s Meet Patricia – YouTube.

Focusing on others vs creating a social norm

The second phase of the study examined the relationships between connectedness, self-efficacy, identity importance and intention to leave a charitable bequest a Will with ‘self-other focus’ and ‘interdependent self-construal’ as the mediators.

The results showed that if people feel a deep connection with the charity and they identify strongly with the charity and its work, and they believe their gift will make a difference, they are more likely to include a charitable bequest in their Will. But at the same time, for that gift to materialise, they must also be more ‘other- focused’. This suggests that another important element of the charitable bequest decision is a person’s willingness to put others’ needs before their own in the belief they can make a transformational difference to their lives.

However, if a supporter does not understand the difference their gift can make, but they still have a deep connection with the charity and they identify strongly with the charity and its work, the decision to include a charitable bequest their Will is then mediated by ‘interdependent self-construal’. In an interdependent relationship a person will look to others to guide their behaviour, which links to the concept of social norming, so the act of including a charitable bequest becomes accepted behaviour.

It is therefore important for charities – and the sector as a whole – to make supporters believe this is a common act; a social norm. Case studies of legacy pledgers can encourage supporters in their decision making when considering leaving a charitable bequest. Some charities might form pledger societies or organise legacy events as a way to normalise legacy giving amongst supporters. This study has found that people will look to others if they do not understand the impact of their gift so showing others who have pledged (or previously left) a charitable bequest is extremely important.

These two alternative routes through the legacy decision are illustrated in the flow diagram below: 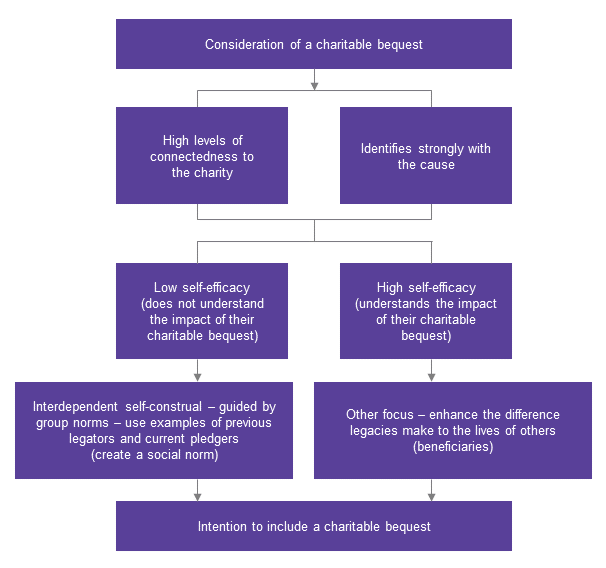 The role of solicitors and Will writers in prompting gifts

Remember A Charity is very active in encouraging solicitors and Will writers to prompt clients about legacy giving in order to increase the number of charitable bequests included in Wills. I hope that the findings of this study can strengthen their work, by giving a better understanding of the most effective ways to prime people about legacy giving. For example, prompting the initial consideration of a charitable bequest is incredibly important but understanding which psychological factors drive the decision could make the prompt more successful. A person needs to focus on the causes they feel connected to and can identify with; they want to believe their gift will make a positive and lasting impact on the lives of others. These findings suggest that a script could be developed for solicitors and Will writers that prompt clients in a consistent way that adds meaning to their legacy decision. An example script could be – ‘Many people decide to leave a gift in their Will to a charity that is important in their life. Is there a charity you feel particularly connected to that you would like to include in your Will, so your gift can make a lasting difference in the future?’

Gaining deeper insight into the psychology behind legacy giving can help to make the act of including a charitable bequest in a will a positive experience by encouraging people to reflect on their life, their loves, and the values they hold dear. Charitable bequests provide a person with the opportunity to be remembered and to support causes close to their heart, providing greater purpose in life. Leaving a legacy is a joyful act so presenting people with the opportunity to influence things beyond their lifetime should become the social norm. Solicitors and Will writers may help generate even more gifts in Wills for good causes by linking the legacy prompt directly to the psychological factors which drive the charitable bequest decision – benefiting us all.

For more information on this research and how it might be applied at your charity, we would be happy to put you in touch with Lucy.

Changes In The Pipeline At Legacy Foresight

Why stewarding your lay executors matters

What could the budget mean for legacies?